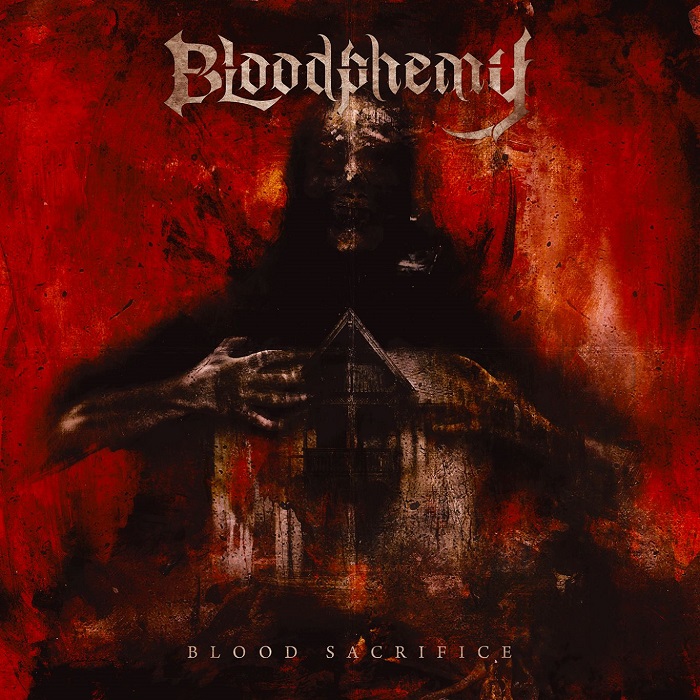 Dutch death metal band Bloodphemy was originally formed in 2000 and self-released their debut Section 8 in 2002, disbanding shortly after.  Thirteen years later a new lineup was formed with original drummer Edwin Nederkoorn leading the charge, and the group has seen a resurgence since then with an EP and three new albums.  This reunited Bloodphemy hasn’t been without further shifts, as this year’s Blood Sacrifice introduces two new guitarists into the fold that weren’t present on 2019’s In Cold Blood.  But their core approach to brutal death metal that favors a mix of slower, groove-laden passages and blasting hasn’t changed, and that’s amplified on this latest release with even stronger production values.

Bloodphemy’s approach to death metal pulls equally from American, Swedish, and their home country, creating a mixture that’s got plenty of grooves and squealing guitars that lead into some intense blasting.  Blood Sacrifice falls somewhere between brutal death metal and traditional death metal, sometimes coming through like Deicide or Cannibal Corpse while other times having a bit more of an Entombed or Grave vibe.  It’s an approach that works well for the band as it allows for some natural transitions between tempos and doesn’t result in a one-dimensional blast fest the entire time.  Compared to In Cold Blood the production values also feel stronger, bringing through plenty of brute force and power while balancing out the instruments so that the guitar and bass are both audible.  This take on death metal is undoubtedly familiar, but when Bloodphemy hits their peak they have riffs that stick with you and are sure to appeal to any fan of the genre.  It does take Blood Sacrifice a little while to get there though, as I found the second half to stand out much more than the first and the stretch of songs from “Bloodborne” to “Derogated Salvation” is fantastic.  Even with it being a little slow to get to the better riffs, this is still a consistent listen from beginning to end though, and the flourishes of death metal influences from different countries make a difference.

Vocalist Olivier van der Kruijf has been with the band since 2017 and delivers a very guttural growl that instantly channels that old-school death metal spirit.  There are some backing screams and shrieks at certain points as well that help to shake things up, and his pitch brings bands like Cannibal Corpse and Blood Red Throne to mind.  Blood Sacrifice is a concept album that explores a priest in a rural village in the 1800s who becomes so obsessed with sin that he ends up murdering his family, and while I don’t usually mention lyrical content in my reviews due to how subjective they are to each listener it’s worth bringing up here due to how well it’s integrated with the music.  Some tracks like “Revelation” sound like they were written specifically around the narrative, and there are some samples and other elements that tie everything together.  You can tell that there’s been a bit more thought behind the vocal work and lyrics than the sometimes randomness heard in a lot of death metal, and that does help this material to stand out a bit more.

It isn’t quite the best death metal of this type I’ve heard in 2021, but Bloodphemy’s grooves and riffs do have some standout moments and the narrative concept makes it a bit more memorable than your average album.  For me it did take a few songs before everything really started to grab me, but that second half remains killer and has kept me coming back.  Those that love everything death metal and are looking for an album that can shake things up and hop between different old-school styles will find a lot to like about this one, and it seems like a sign that this reformed group is only getting better with age.  Blood Sacrifice is available from Emanzipation Productions.