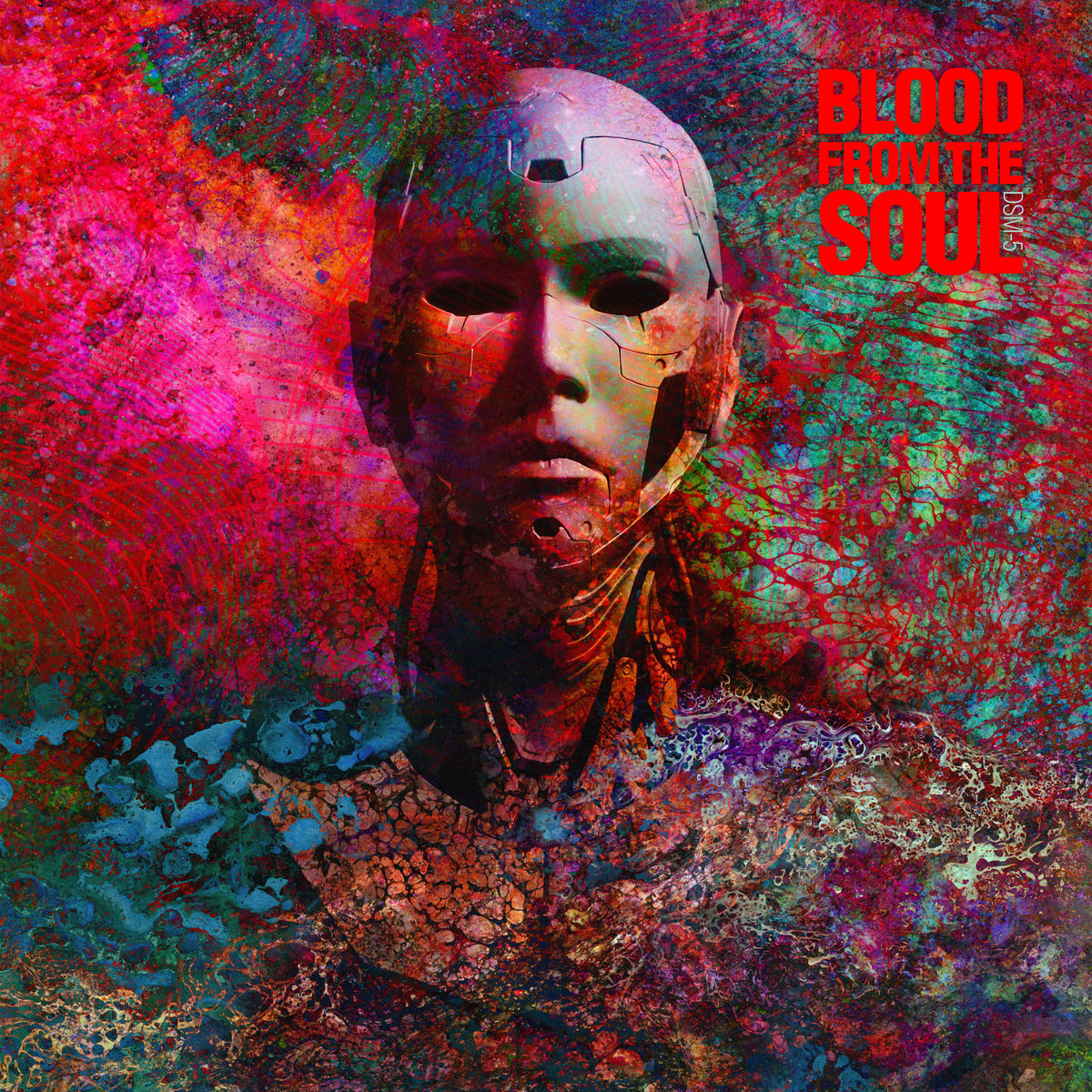 DSM-5
by Blood From the Soul

Blood From the Soul’s roots span back to the early 90s, when Napalm Death bassist teamed up with Sick of It All’s Lou Koller and released To Spite the Gland That Breeds in 1993.  The album incorporated elements of Embury’s playing in Napalm Death but took elements of punk and industrial metal in a more methodical direction, sometimes channeling a path similar to Godflesh.  While Embury would go on to be involved with a slew of other bands in the decades that would follow, Blood From the Soul remained dormant until this year when it was brought back with a new lineup that would qualify for supergroup status.  The resulting effort DSM-5 retains some of the elements of its predecessor while pushing outwards naturally towards an expansive sound that has a considerable amount of staying power.

One of the first things you’ll notice when listening to DSM-5 is the fuller sound and overall density of the instrumentals.  With Dirk Verbeuren (Megadeth, Soilwork) and Jesper Liveröd (Nasum, Burst) now supporting Embury this makes sense, and the switch over from a drum machine to Dirk’s fluid playing makes the material feel a bit less mechanical sounding than its predecessor.  There are still noticeable industrial edges to the sound that blend in with the metal and hardcore riffs, but this is an even more dynamic listen and doesn’t merely repeat what To Spite the Gland That Breeds established so many years ago.  What works to the group’s advantage is how well they’re able to balance harsher and jagged riffs with melodic leads, creating songs that pummel you with power but bring forth an inviting atmosphere that keeps you compelled to keep coming back.  It does take a few songs before this mixture fully reveals itself, as opener “Fang Tooth Claw” starts off on the heavier side of the spectrum with weighty grooves.  From there you get more lumbering grooves, hookier guitar leads that bring in a bit more punk, and hints of grind and industrial metal that add to the density of the overall soundscape.  Converge’s Jacob Bannon has taken over from Lou Koller on the vocal front, and it’s interesting to find that Embury and company sometimes shift over towards some angular riffing and tempo shifts that are reminiscent of Bannon’s main band.  “Debris of Dreams” and “Encephalon Escape” in particular remind me of Jane Doe and You Fail Me, which considering how high those albums rank in my personal favorites certainly helps make DSM-5 all the more appealing.  But Blood From the Soul rarely stays in one place for too long and despite its almost fifty-two minute run-time there’s plenty of substance to keep listeners engaged the entire way through.  Highlights include the very punk-rock leaning “Calcified Youth”, the lush melodies of “Subtle Fragment” that bring a slight hint of shoegaze, and the haunting title track that finishes the album off with bursts of electronics and creepy, slow building guitar and bass work.

As previously mentioned, Jacob Bannon’s taken over on the vocal front and you’ll notice his familiar screaming pitch right from the start.  I’ve always found that Bannon’s jagged and higher pitched screams have been an acquired taste for listeners over the years, but if you’re a huge Converge fan like me then you’ll likely feel right at home with DSM-5.  The performance retains the same dynamic feel that Converge material has offered over the past decade or so, with spoken word and some cleaner singing ranges making an appearance to help break up things up and provide a slight respite from the harsher passages.  While one can’t help but wonder how Lou Koller might have fit with some of these ideas, there’s no denying that Bannon fits the fluid and dense nature of these compositions.

Blood From the Soul’s sophomore effort takes the foundation established in the 90s and pushes off towards a whole slew of additional hardcore and metal styles, resulting in an album that doesn’t stay in the same place for too long but consistently brings hooks that help the material stick with listeners.  This is one of those albums that I haven’t been able to stop listening to since that initial play-through, and I suspect fans of Converge and Napalm Death alike will find a lot to love here.  Don’t necessarily expect an exact replication of To Spite The Gland That Breeds and its methodical nature, but do expect material that hits that sweet spot between brutality and sweeping atmosphere.  Here’s hoping that this new lineup of Blood From the Soul doesn’t end up being merely a one-off, as they’ve touched upon something special.  DSM-5 is available from Deathwish Inc.