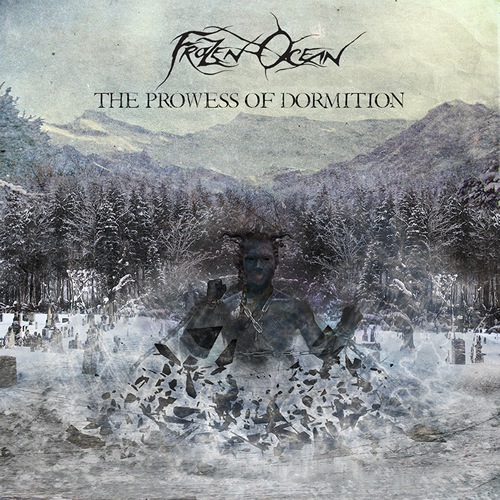 The Prowess Of Dormition
by Frozen Ocean

Frozen Ocean is the mindchild of Vaarwel, a multi-instrumentalist in Russia.  Since 2005, the project has put out a number of releases that can be found on the bandcamp page.  But now with the help of known label Apocalyptic Witchcraft, we will witness life of a new EP, The Prowess of Dormition.  Fusing lush ambient symphonics with atmospheric black metal, Frozen Ocean is a lovely snowstorm of an experience.

In many ways, I can hear stylistic similarities with Panopticon.  There is a similar focus on heroic-sounding, folky melodies.  Lead guitars soar into the stratosphere with post-metal tremolos, accompanied by a heavy-yet-subdued set of deep, blackened growls.  Heck, the instrumental (and my personal favorite track), “Det Siste Snøfallet,” sounds like it could have been an outtake from either of Austin’s last two albums.  If that’s not a compliment, I’m not sure what is.

But there are just as many differences as similarities.  Whereas Panopticon fills out its use of distortion with traditional Southern instruments and aesthetic, Frozen Ocean is more driven by ambient symphonics.  One might assume what this would sound like based on the many “symphonic black metal” bands out there, but they would be mistaken.  The particular use of the keys on tracks like “Once Aglow” strikes me as more The Cure or even Sonic Youth than Emperor.

Once combined, these lofty and overtly uplifting sounds create a veritable blizzard of sound that is satisfying and full. Like some weird, black metal Elsa; I feel surrounded by frozen fractals spinning round, forming isolated, gothic castles in uninhabitable regions.  Corny, maybe...but the music isn’t.  Even when things get decidedly electronic on the closing track, the result is something I would simply describe as unique.  In any case, you can purchase the album today here.  Wear a coat.  The cold does in fact bother real human beings.