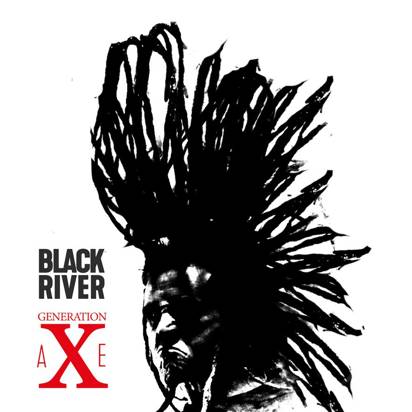 As I enter my seventeenth year of reviewing music, it’s always fun to rediscover bands I had written about years ago that had fallen off my radar for one reason or another.  One recent example of this is Polish rock/metal band Black River, who I encountered back in 2010 when Eagle Rock imprint Armoury Records released their second album Black‘n’Roll in North America.  With members who had also been part of much more extreme acts such as Vader, Behemoth, and Neolithic, Black River gave them the chance to do something different and fell somewhere between heavy metal, stoner rock, and hard rock.  Sometimes they sounded like Corrosion of Conformity or Monster Magnet, while other times had a bit more of a Danzig vibe.  Not long after the release of Black’n’Roll vocalist Maciej Taff dealt with some health issues that spelled the end for the band, but they would re-emerge in 2019 with Humanoid.  Since I didn’t hear about that one at all, I pick up my time with Black River courtesy of this year’s Generation aXe, which opts to go almost full punk rock and offer something completely different.  Flying by at a brisk twenty-one minutes, it’s a different sound for this group that manages to be both angry and fun at the same time.

Four albums in, I can appreciate the desire to do something a little different and considering that Generation aXe is filled with fast and punchy songs that all last between two to two and a half minutes Black River has done just that.  This album is around half the length of its predecessors and yet it still manages to cram a lot of different ideas in that span of time.  Opener “Oxygen” comes roaring out of the gate with scorching riffing that feels somewhere between punk and heavy metal, but a surprise transition towards the end injects a little melody.  Despite the punk flair in both tempo and tonality, there are callbacks to the band’s hard and stoner rock roots with plenty of crunchier riffs sneaking their way in.  The press material notes that there was an added emphasis on aggression here, and you’ll definitely hear that on songs like “Under My Flag” and “Civil Army” but you can also tell that Black River is having some fun throughout Generation aXe.  Whether they’re sneaking a quick bit of “Hit The Road Jack” with a spin on the lyrics or offering up a rougher edged cover of The Doors’ “Break on Through”, these moments provide some slightly lighter moments in between the intensity.  Admittedly with the emphasis on songs being one to two minutes or less, there is a tendency for them to run together and they don’t always reach the same heights as some of their prior discography.  Yet even with this being the case, the short length makes this a fun album to spin from beginning to end and I’ve been doing just that for the past few days.

What I remembered of the vocals on Black’n’Roll was a rougher edged style that had a bit of punk and metal flair alongside a stoner/hard rock foundation.  Maciej Taff’s still channeling that sound throughout Generation aXe, but there are so many different pitches that it can be hard to keep track of all of them the first time through.  You’ve got that rougher edged singing approach that recalls a bit of Danzig or Monster Magnet, but sometimes it’ll lead into screaming or the type of maniacal yelling that ends “Joker”.  Black River’s vocals are often aggressive and heavy but aren’t afraid to get a little weird, and Taff’s gruffer take on “Break on Through” is better than I was initially expecting.  A few of the pitches didn’t quite click with me and sounded slightly off, but overall there’s plenty to like about what this material has to offer.

Generation aXe is a very different album than I was expecting from this band, but that’s a good thing.  They’ve gone for a stripped-down punk and hard rock approach where the tempos are fast and furious while still trying to cram in a lot of different ideas.  Admittedly the songs that stand out the most are the ones where they throw in some curveballs courtesy of a sudden melodic break or the aforementioned “Hit the Road Jack” homage, while the more straightforward ones run together.  But it all comes together in an intense yet fun, likeable way and that’s made me want to return to this album frequently even with this flaw.  It’s clear that this reunited Black River isn’t content to simply repeat what they’ve done before, and I’m intrigued to see what they decide to do next.  Generation aXe is available from Crusader/Golden Robot Records and Mystic Production.