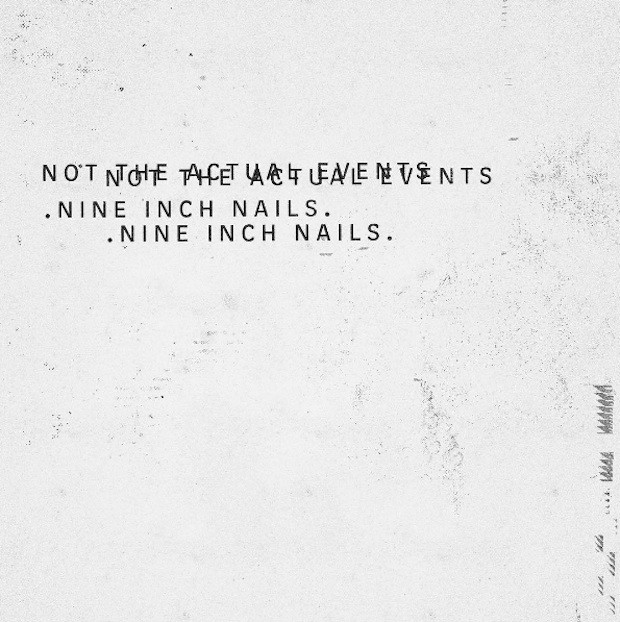 Not the Actual Events
by Nine Inch Nails

The Pitch:  Believe it or not, this is the first NIN EP since 1992's Broken.  The comparisons stop there.  More modern NIN featuring Atticus Ross as a full time member as well as collaborations with Dave Grohl, Dave Navarro, and Mariqueen Maandig.

Summary: So after Hesitation Marks, I had pretty much had it.  While NIN has been one of my all time favorite bands since high school, and they can still bring it live, I was sick and tired of responding to new releases like With Teeth and Year Zero with a response of "Yeah...it's okay I guess."  I was actually happy when Trent went left field with Ghosts and started putting the band to rest as he moved on to his (enjoyable) soundtrack work with Atticus.

So what of Not the Actual Events?  It's still pretty "yeah...it's okay," but I'll take it over the dullery of the previous LP.  If anything, this EP feels like a roundup of outtakes from throughout the NIN lifespan even though it was all recorded pretty recently.  Getting my least favorite track out of the way off the bat, "Branches/Bones" sucks.  It just does.  There is nothing I find redeemable about it.  "Dear World," on the other hand, is a chill but solid track with a steady beat and very The Social Network-sounding synth hook.  It would fit well on With Teeth.

"She's Gone Away" and "Burning Bright (Field on Fire)" alternatively could have fit in on The Fragile, though the former has some With Teeth vibes as well.  With its hypnotic bass groove and unusual vocals, I feel like I've taken a few too many hits of LSD.  The latter track wins its comparison to perhaps NIN's creative peak with bass and guitar hooks that feel like a callback to "The Way Out Is Through."  But if you were wanting a slightly more aggressive track a la The Slip's "1,000,000," "The Idea of You" should scratch that itch with Grohl's frenetic approach to the drums and buzzing distortion.  Just know that the explosive "choruses" are still offset by some piano and spoken word.  One might argue there is more than a little "I Do Not Want This" influence on this one.

The Verdict: All in all, this EP is a bit of a tease.  Maybe they can still put out good music?  But then again, it's still not great music.  It'll never be The Downward Spiral.  It makes me think of, wait for it, "all that could have been" (groan).  That's not necessarily a good OR bad thing.  But if I can make one concrete conclusion from this project, it's probably that Trent and company should consider sticking to this format for the forseeable future: releasing a handful of tracks every few years when true inspiration strikes and otherwise focusing their attention on atmospheric work for films.  Trent, you've matured beyond the youthful angst this project thrives on; and even though you're still plenty pissed at the world given the political climate and direction of the music business...you have money, a beautiful wife, and a freakin' Oscar.  I know from a smaller scale that it can be hard to recondile that, so it's best to just know where you are right now and play to those strengths rather than trying to reignite fires long since burned out.