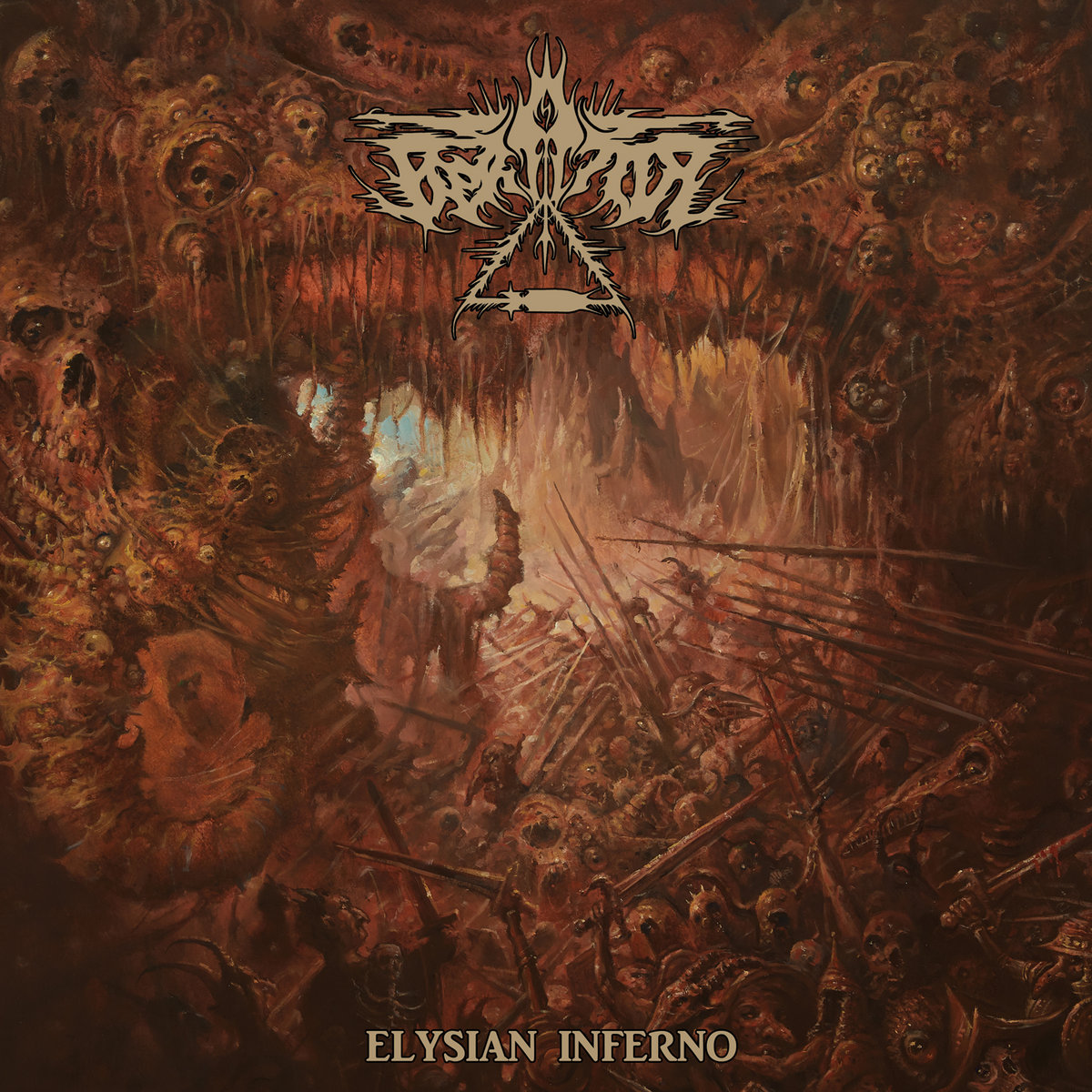 Berator’s EP Elysian Inferno has been a long-time coming, as the band released their initial two-track demo back in 2018 and inked a deal with Dark Descent Records at the end of 2019.  Given the backed-up schedules of most labels given vinyl material shortage and other pandemic related issues, this longer lead time may not be unexpected, but it hasn’t kept the Chicago band’s re-emergence from being any less scorching.  Falling squarely in between the realm of black and death metal, Berator emphasizes chaotic and unrelenting riffs that form a battering ram of intense and filthy sounding material and do it with quite a bit of precision.  While there are a lot of familiar elements at work throughout Elysian Inferno, the band is able to vary things up in a way that suggests future material could push them even closer to a sound with unique qualities.

Coming in at six songs and twenty-two minutes, Berator offers up riff after riff of fast paced and intense black/death metal that has a decidedly old-school sound.  The darker atmosphere and fiery build-up of opener “Sultans of Incest” gives off a feel similar to classic openers from Possessed or Sadus, and once the tempo kicks up the band rarely lets off the gas from that point forward.  Everything flows together seamlessly in a blitzkrieg of swirling guitar and bass work along with the occasional mid-tempo section, and there are equal amounts of old-school death and black metal as well as the war metal type variants.  They maintain a fine balance between the two, and there are even moments that fall more into the thrashier side of death metal as that genre was starting to truly take form.  You’ll often go from scorching death metal solos into some evil sounding black metal riffing, and “Final Crucifixion” heads into full-on warlike rhythms that are closer to Archgoat or Black Witchery.  What elevates Elysian Inferno above your average group of this type is the execution, as it’s performed with precision rather than sloppiness and there are subtle rhythmic variations that help certain sections to stand out a bit more.  Combine this with production values that add some filth and a rougher exterior to the material, and you have an appealing combination.  Admittedly with the way Berator shifts so seamlessly from black to death and back again, the subtle nuances leave me feeling like there’s room for them to push these ideas even further and really push them into territory that will set them apart.  But given the brief length and sheer power of these songs this has been an EP that has seen plenty of airtime for me, and I suspect quite a few listeners will feel the same way.

Founder Richard Olsen handled all instruments, lyrics, and songwriting on the band’s demo in 2018, but didn’t contribute vocal work until this EP.  Three out of Berator’s four members trade off some screams and growls throughout Elysian Inferno and that helps to add even more intensity to these already hard-hitting tracks.  The primary style is a raspier scream that is drenched in so much echo that it sounds like its bursting through the walls of a crypt, and you get all sorts of higher and lower pitches added in as back-ups.  Sometimes the vocals do seem a bit danger in getting washed out amongst the layers of guitar, bass, and drums, but even when they do fade ever so slightly it isn’t long before they break through once again.  The way a few of the high screams traded off with the lower ranges reminded me of the back-and-forth approach of Auroch or Mitochondrion, and there’s a similar amount of power behind Berator’s performances.

It’s clear that Berator has spent some time fine tuning these songs, and as a result their EP is razor sharp and filled with riffs that bludgeon from beginning to end.  And while it doesn’t quite reach that instant classic level for me, the easily digestible length and strong writing has still made me want to come back to this one regularly.  I think Berator has room to twist and turn the interplay between black and death metal even further in ways that sets them apart, but they’ve laid out a great foundation to do so and this is another great showing from Dark Descent’s roster.