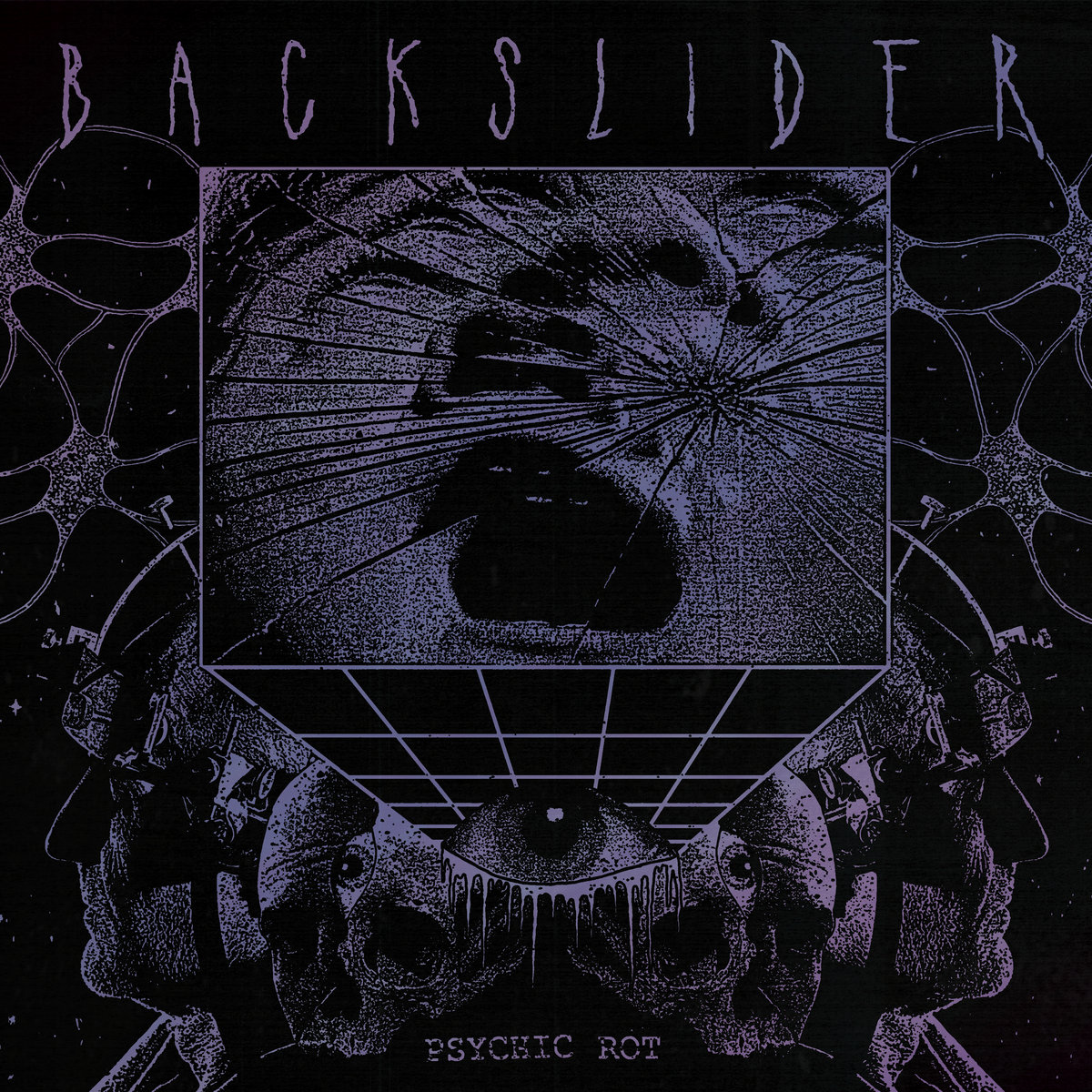 Philadelphia’s Backslider started off as a more straightforward grindcore/fastcore band back in 2008, but over time they’ve evolved to tackle a little bit of everything within the hardcore, grind, and even sludge realms.  I saw them way back at Maryland Deathfest in 2012, at which point they were a two-piece, and remember getting a frantic blast to the face in a very short period.  In the decade since that performance a lot has changed, as not only did the two-piece become a three piece with the addition of a bassist but they’ve also swapped drummers.  For full-length number two, Psychic Rot, Backslider has continued to throw all these elements into a blender with the precision that comes from being seasoned veterans.  It’s a quick listen that crams a lot into twenty-four minutes, and while a few sections don’t quite hit the mark this is still an album fans of these styles will find themselves returning to.

The mention of sludgy grind/hardcore likely clued many of you into what you’re getting with Psychic Rot, as these songs often fly by at breakneck speeds and have dizzying tempo changes that are pulled off with ease.  Over the ten-track run-time Backslider switches up the formula regularly, sometimes opting for sub two-minute assaults that go for straightforward blasting and often stop and start without warning, keeping you off balance as they pummel you with one hit after another.  When the song lengths run for slightly longer some additional stylistic elements are thrown into the mix, with some sludgy and bluesy grooves that have a bit of Eyehategod and Sourvein vibes seeping into the grind foundation.  This is most prevalent on the five-minute closer “The Floating Door” which slows things down significantly and injects some darker melodies and grooves that fall somewhere between pre-Jane Doe Converge and Eyehategod.  While some grind and powerviolence completely falls apart when they slow things down as it kills the momentum and the riffs just aren’t that interesting, Backslider pulls it off and tracks like “Bone Thief” also stand out upon repeat listens.  I’m not fully sold on the sample and electronic laden interludes though, as they stick out a bit too much and mess with the flow of the material a bit.  I would’ve rather seen these electronic and creepy atmospheric moments better woven into the other tracks rather than as standalone moments.

From the very first second until the end of Psychic Rot, the vocals remain as aggressive and destructive as possible.  “Asymetric Torment” makes an immediate impression with the extremely low screams that break into some extreme levels of distortion about a minute in.  This type sometimes seems to be an acquired taste for listener, but I think it fits what Backslider is doing here and keeps the intensity at a high throughout.  Songs like “Pseudomessiah” and “Mortuary Art” add some spoken word into the mix which gives off a slightly weirder and creepy vibe that may just catch you off guard the first time through, and that ends up working to the band’s advantage.

It’s not easy to pull off the seamless tempo changes and stops/starts that Backslider does here, and that showcases just how long they’ve been refining their craft.  They have attempted to branch out more and throw in more random hardcore, sludge, and everything in between, and while not all the songs reach that truly distinguishable level, they do come close.  I’d also like to see some of the creepiness of the samples and noise elements integrated into the grind itself rather than as a separate interlude as I think it’d help the flow.  But even with that being the case, this has remained an album that’s been worth getting pummeled by frequently and Backslider has more to offer than the average band going for one-dimensional blasting.  Psychic Rot is available from To Live a Lie Records.