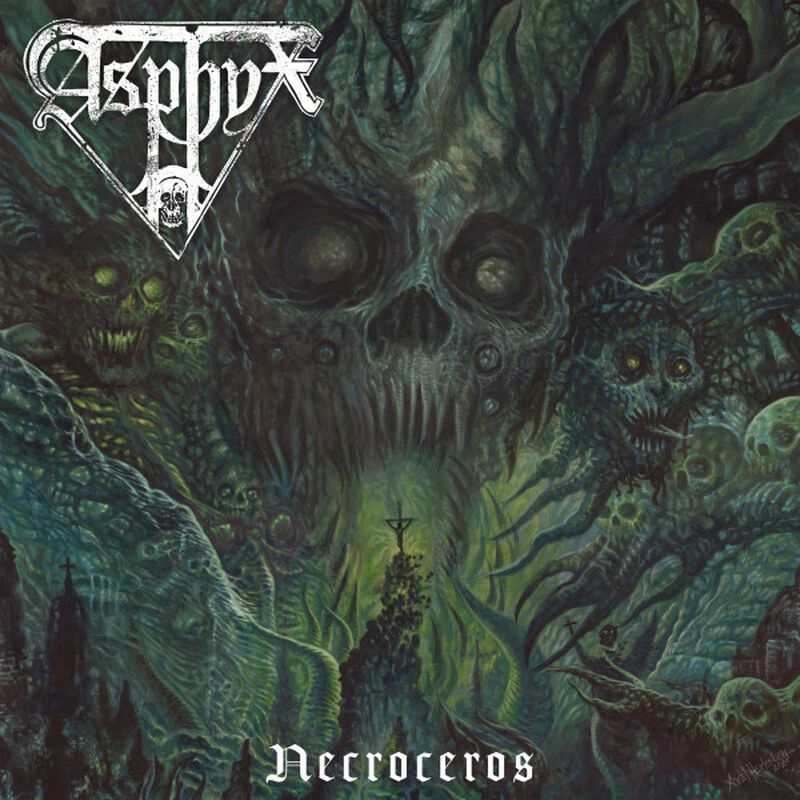 Anyone that’s gotten into death metal has likely spent some time with Asphyx as they went further down the rabbit hole, as the Dutch band’s take on slower death metal helped to shape some of the death/doom that would come a few decades later.  Like any group that’s been around for three decades there have been plenty of lineup shifts and some periods of inactivity, but recent albums like Deathhammer and Incoming Death have shown that Asphyx still has plenty of life in them.  As the thirtieth anniversary of their debut The Rack approaches, the band’s tenth effort Necroceros has also been unleashed and it finds them continuing to do what they do best with some truly crushing riffs and moodier atmosphere.

Each Asphyx album has generally had some minor lineup changes, but Necroceros features all of the same musicians that wrote Incoming Death and this allow them to refine their current approach to death/doom even further.  Stylistically it doesn’t deviate that much from what long-time fans have come to expect from the band, but there is an emphasis on longer tracks that move between tempos and shake things up a bit more frequently than standard death metal.  “The Sole Cure is Death” kicks things off with crushing intensity and a lumbering groove that builds into an all-out whirlwind of faster riffs, only to slow things down to a crawl towards the end and let the atmosphere fester.  What continues to draw me to Asphyx is how they often move between all of these tempos in the course of a single song rather than keeping their death metal and doom elements relegated to separate tracks, which some of the newer bands have a tendency to do.  There are a few songs across the fifty minute run-time that do blur together a bit on repeat listens, but the album as a whole flows really well and the way the group has laid out a slower piece that lets some melody and atmosphere in to end each side works to their advantage.  Highlights of Necroceros include “Three Years of Famine” which incorporates some unexpected acoustic guitar at the halfway point and emphasizes a bit more melody alongside the crushing base as well as “Botox Implosion” which is one of the most explosive songs on the album and has the same frantic energy and speed as earlier death/thrash.

While there are plenty of death metal vocalists who have left a lasting impression on me, few get my blood pumping as much as Martin van drunen.  His raspier screams once again tower over the recording with the force of a tank, and no matter what speed Asphyx is going they always fit in and add to the overall intensity.  There’s a sense of dread and horror that seeps in from the vocals when they are placed over the slower passages, while on the faster tracks like “Botox Implosion” you can tell right from the start that van drunen is having a blast screaming over top of these blitzkriegs.  From a vocal perspective, you know exactly what you’re getting with recent Asphyx albums but that’s not a bad thing as even after all these years the performance remains as powerful as ever.

A few of the songs blend together over repeat listens, but the high points are on par with some of the band’s best moments and find them sounding as energized as some of the newer acts out there.  It doesn’t quite reach the same heights as the classics for me, but is still a strong effort that is worth returning to, and ten albums in that’s a great place for Asphyx to be in comparison to some of the other death metal and death/doom bands that have been around for just as long.  Some crushing and lumbering metal seems like an appropriate way to start off another unpredictable year.  Necroceros is available from Century Media Records.