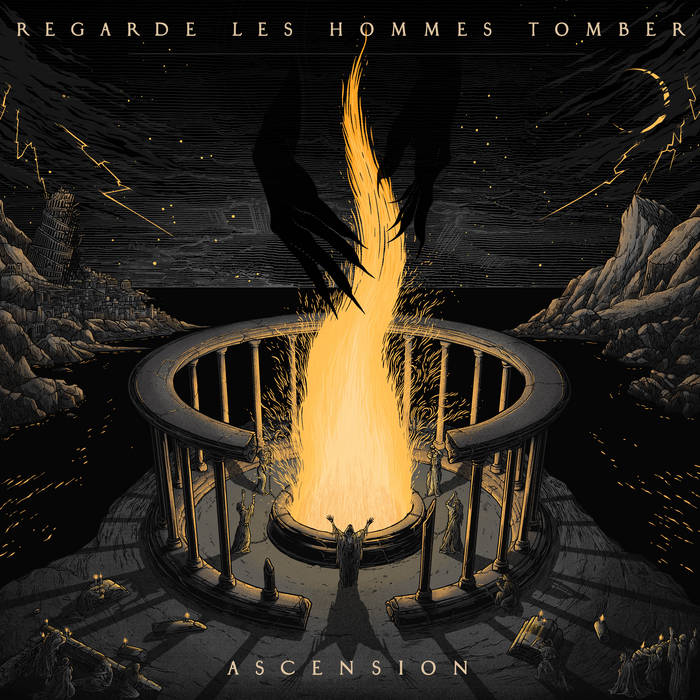 The Pitch: French black metal group Regarde Les Hommes Tomber return from the abyss with another fiery album, this time with the support of Season Of Mist. FFO: Bolzer, Misþyrming, Schammasch

What I Like: "Gigantic, oppressive, masterful": these were the words I chose to describe the band's excellent 2017 effort, Exile. And fortunately, all of these adjectives still hold true on Ascension. Much like their peers listed above, this collective has a knack for crafting massive walls of oppressive darkness that seem to spew from the pits of Hell itself. Every note is positively dripping with malice. And while each instrument does its part when taken individually, it is once more the sum of these parts where the real black magic happens. The wailing, reverb-soaked guitars, tireless blastbeats, and mournful black metal wails utlimately function as one unholy beast; another Eldrich horror beyond human comprehension that defies written description. I'm particularly caprivated by the final 3 tracks. "The Crowning" is an utter masterpiece chokes you with enough sorrow to induce asphyxiation. "Stellar Cross" follows suit with a strange hypnosis of doomy, oscillating guitars and Bolzer-esque cleans, setting us up perfectly for the final fiery crescendo of "Au Bord Du Gouffre" What an ending.

Critiques: As impressive as it all it, Ascension is also not really anything I haven't heard before either. Given the strength of the debut, I must say I expected just a little bit more.

The Verdict: Though somewhat lacking in original voice, Ascension is a rock solid black metal album that should not dissapoint fans of the genre. I am happy to see Regarde Les Hommes Tomber already rising in the ranks, and my hope is that they will continue to mature and innovate as their influence grows.