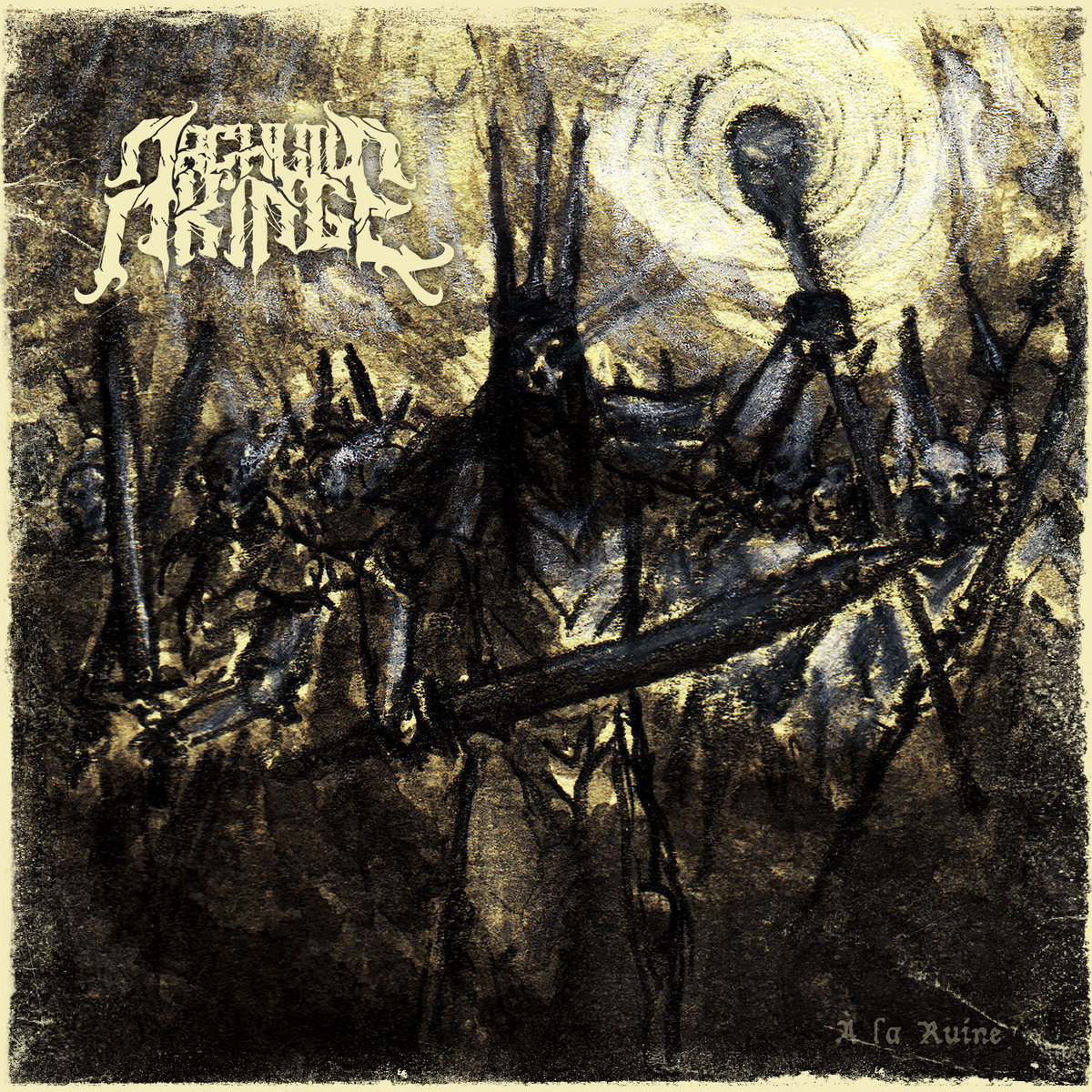 Formed as a solo project of French musician Baurus, Archvile King started off as a thrash influenced band with a healthy dose of black metal but has embraced its blackened side significantly in the years that have passed since its debut EP Vile in 2020.  À la ruine transforms Baurus’ approach significantly, retaining hints of black/thrash but leaning on roaring second-wave Norwegian black metal and the more triumphant and melodic French variants of the genre to bring his ideas to life.  And while Archvile King’s sound may bear similarities to some of his fellow countrymen when it comes to the shrill melodies and emphasis on power and beauty, the hooks remain strong enough to make this debut a contender.

À la ruine begins with the sound of crackling flames and narration in French, with acoustic guitar immediately establishing a darker and mysterious tone before waves of distortion and colder melodies take over.  The first proper track “Mangez vos morts” goes for the throat with a thick bass line and abrasive guitar work that feels somewhere between classic second-wave Norwegian black metal and the melodic Swedish variants from the 90s.  But as you get further into the album the sound transitions towards a more triumphant and powerful sound, where the melodies seem to be beckoning you to battle over top of a roaring foundation.  On some songs the faster brutality of thrash and black/thrash seep back in, but this album feels like a much different beast that embraces multiple facets of everything black metal.  While not as overtly medieval sounding as some of their peers, I was still reminded of other French bands like Véhémence and Crépuscule d'Hiver, as the mixture of acoustic guitar and jagged black metal delivers a similar effect.  Although the material is consistently strong from beginning to end, the run from the title track to “L'Artisan” offer the most stunning moments.  The title track offers a softer, acoustic interlude with an almost neofolk tonality, while the two songs that follow offer up such dark and powerful atmosphere that they feel like they’re thrown you right into the midst of all-out destruction and war.  The throbbing bass line of “Vêpre I” reminds me of the violent, nightmarish qualities of bands like Cult of Erinyes, and Archvile King’s ability to channel this same tone is appealing.  There remains some room for Baurus to further expand upon these ideas and enhance the acoustic and softer elements in ways that surprise the listener, but he’s put together a very strong foundation that has more hooks than I initially expected.  For those that choose the physical versions you get a bonus track “Cheating the Hangman” which showcases the thrash origins, sounding more like Aura Noir than anything else on the record.

Although there’s a significant emphasis on melody throughout À la ruine, the vocals remain focused on offering up harsh and abrasive pitches for the entire album.  Baurus’ primary style is a raspier scream that adds some additional jagged edges to the recording, but you’ll notice that he layers in some growls on songs like “Celui qui vouvoie le soleil” that further fill out the sound.  These moments where he layers in these high and low ranges make Archvile King’s debut come through with immense power and force, and when combined with the triumphant and somber beauty of the guitar work this makes for material that sticks with the listener.  As mentioned earlier, the first song features narration courtesy of Andreea Dinag, and while I wondered if that might be utilized more throughout the rest of the album that doesn’t end up being the case.  While I’m sometimes hit or miss on this type of narrative approach in black metal, I think it works here and it’s an aspect that Archvile King could use more of as the band moves forward.

This debut marks a shift for Baurus towards a sound that leans heavily into traditional black metal alongside its melodic variants, sounding like other French and Norwegian bands at points but also exploring some different acoustic textures.  While there remains room for room for Archvile King to further experiment and channel a different balance of these soft, somber moments and roaring, triumphant ones, the amount of tracks that stand out still makes this an album that will stick with me for some time to come.  À la ruine is available from Les Acteurs de L'Ombre Productions.