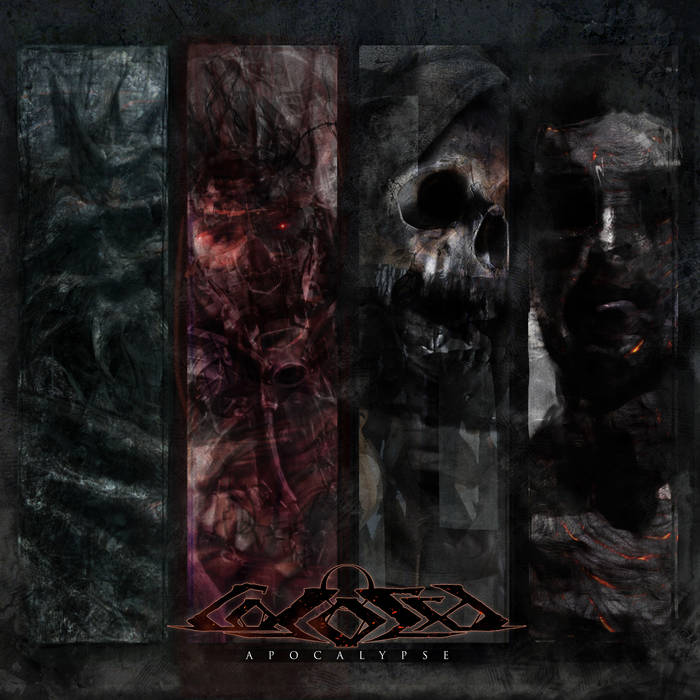 Portugal’s Colosso has covered quite a bit of ground since their formation in 2011, with founder Max Tomé moving between dense and dissonant death metal and a more groove heavy approach depending on which release you were listening to.  For the group’s latest EP Apocalypse they’ve enlisted the help of several vocalists from the Portuguese metal scene to channel the Four Horsemen in musical form.  It may be a shorter release but each of the four tracks packs a punch and the sheer blast of intensity combined with the oppressive atmosphere is sure to entice you to come back for more.

Apocalypse strikes a middle ground between some of the styles that Colosso has offered previously while still pushing the band forward.  For those that liked some of the pummeling grooves and swirling death metal riffing, there’s plenty of that on “Pestilence” and “Famine”, while “War” channels some of the oppressive atmosphere that was a constant throughout Obnoxious.  The instrumentals continue to be a bit more multi-faceted compared to some of the other death metal out there though, as for all of the passages where the guitars chug along or blast away there’s also quite a bit of melody woven in that differentiates one song from the next.  “Death” is a great example of this, as it eases off the bottom heaviness ever so slightly at the beginning to let some haunting melodies seep in before doubling down on its intensity.  Despite the twenty-minute length there’s a lot to take in throughout Apocalypse and even when Colosso seems to be heading into more straightforward death metal territory there’s an unexpected transition to keep things versatile and interesting.

Tomé handles vocals on “Death”, but the other three songs feature guest vocalists from the Portuguese metal scene.  Given the towering depictions of the Four Horsemen it makes sense that the guests would be oriented towards the more brutal side of the spectrum, which Sérgio Afonso (Scent of Death) and Diogo Santana (Trepid Elucidation) channel perfectly through some extremely low growls.  The other two performances branch out a bit from this brutal death metal base, as Guilherme Henriques (Oak) has a growl that is a bit fuller and varies a bit more in range which gives off a commanding presence to “Pestilence” while Tomé opts for singing that has a softer, introspective tone as “Death” takes hold.  Sometimes EP’s and albums that rely on guest vocalists over permanent members don’t feel as cohesive, but the pitches complement each other well and it’s clear that Colosso has chosen well.

Colosso has forged ahead with an absolutely crushing effort that does its subject matter justice.  While some of its passages seem deceptively straightforward at first with their dense grooves, there’s nuances underneath the surface that make this band distinguishable in their approach to death metal and its offshoots.  With just the right amount of brutality and atmosphere, there’s a lot to like about the direction Colosso’s headed on this EP.  Apocalypse is available from Transcending Obscurity Records.