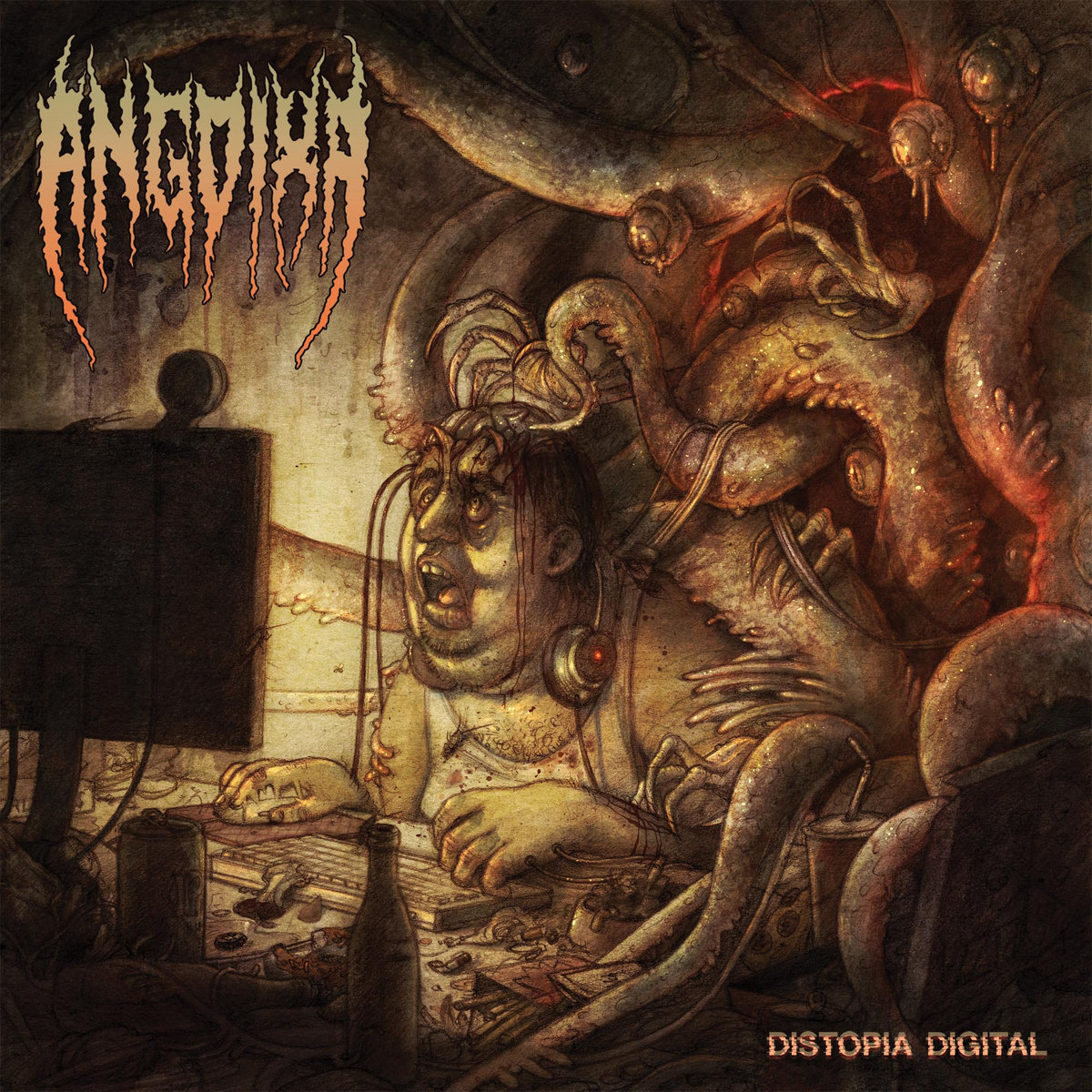 Death metal is everywhere these days, with bands from all over the world offering up their take on that buzzsaw HM-2 guitar tone and attempting to put their own spin on the old-school sound.  Angoixa has been doing just that since 2014, with the Barcelona based band starting off as a solo project before expanding to a full band by the time third album Esclaus de la por came out in 2018.  Like many of the others out there, Angoixa takes influence from the classic Swedish bands of all but has written all their lyrics in Catalan and injected a bit more melody.  Their latest effort Distopia digital builds upon this foundation with a more concise package, offering up equal amounts of haunting melodies, grooves, and blasting.  Although some of the elements do start to blur together by the end, this remains a strong showing from a band that’s worth putting on your radar if you can’t get enough of that old-school sound.

The album starts off on the slower end of the spectrum, as opening track “Desolació” opts for a methodical build-up where a dark and sinister atmosphere swirls around you for the first minute or so before that familiar HM-2 tone comes into play.  As you make your way through Distopia digital, you’ll notice that Angoixa often pulls from as much classic death/doom and some early melodic death metal as they do Entombed and other Swedish death metal, as the lumbering grooves and blasting where the buzzsaw tone dominates give way to more thoughtful and creepy melodies.  This is still first and foremost a death metal album, so don’t expect the slower passages to dominate or the band to head into full-on Gothenburg style melodic death metal, but the way the instrumentation moves back and forth between atmosphere and crushing brutality gives them a bit more diversity than your average old-school worshipper.  When these two elements reach their peak on tracks like “La crisàlide” and “Monstres” this makes for some truly stunning moments where you get some almost gothic death/doom sounding melodies combined with that HM-2 crunch, and these songs are likely to stick with listeners for some time.  You’d swear there were keyboards on Distopia digital, but Angoixa has instead pulled their dark and haunting atmospherics thanks to samples and guitar effects which go a long way.  However, while the material is consistent from beginning to end thanks to its quick run-time and has some standout moments, the way in which the melodies are implemented starts to feel a bit too familiar by the end.  There’s a similarity between how the band moves from the old-school death metal to the melodic moments from one song to the next, and there’s still room for the band to further deviate this approach and shake things up.

If you’re a death metal fan that prefers the traditional approach over melodic death metal, don’t let the emphasis on melody in the instrumentation scare you away as the vocals stick entirely on the harsh end of the spectrum.  Band founder Robert Garcia has a very low growl that helps to further fill out the sound, but there are also some slightly higher pitched screams thrown into the mix that help to keep the vocals dynamic.  Angoixa also likes to layer their vocals together, allowing Garcia to utilize both pitches at the same time and this makes some of the peaks as intense as one could want from their death metal.  One of the biggest issues I have with a lot of death metal that leans heavily on the Swedish template is repetitive vocals, so the nuances here help significantly.

With four albums under their belt and two as a full band, Angoixa has continued to capture that Swedish HM-2 sound while also offering up some haunting melodies that wouldn’t sound out of place on a 90s death/doom record.  There remains room to further shake up the transition from blasting and heavier tonality into melodies, as some of the songs here start to fall into similar patterns, yet I can’t deny that some of the hooks here have kept me returning to this album.  Hopefully by the time their next effort comes around they’ll be able to fully captivate from beginning to end, but for now there’s plenty here that puts these guys above the countless others that use that familiar HM-2 tone without much substance.