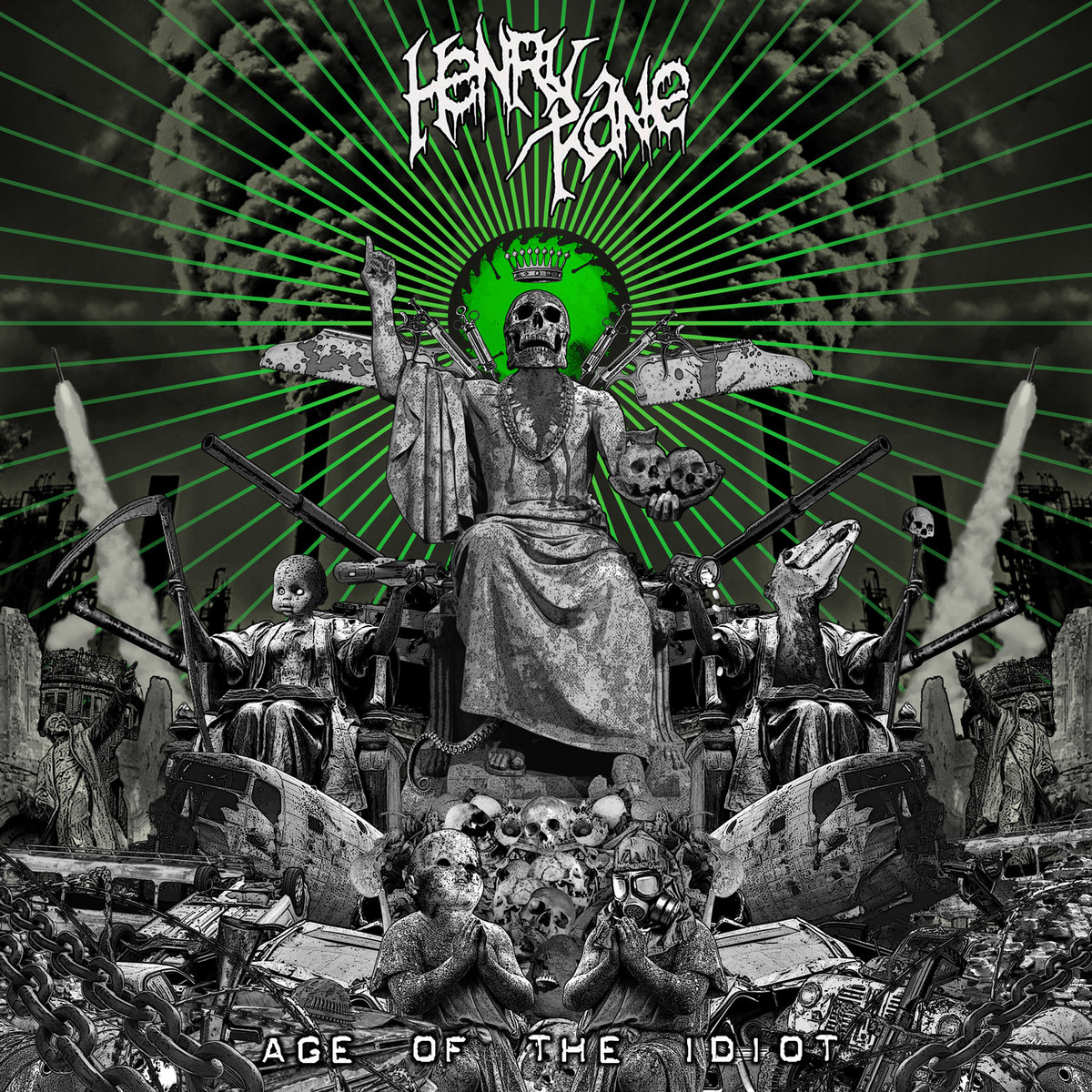 Age of the Idiot

Age of the Idiot
by Henry Kane

Along with Rogga Johansson, Jonny Pettersson is easily one of the busiest musicians in Swedish death metal and the man is in so many different bands that it can be hard to keep up with all of them.  Chances are you’re familiar with some of them, as the likes of Wombbath, Gods Forsaken, Heads for the Dead, and Berzerker Legion have gained traction among death metal fans worldwide.  One of Pettersson’s newer projects is Henry Kane, where he handles everything himself and incorporates elements of grind and crust alongside the Swedish death metal base.  Following 2017’s Den förstörda människans rike, Henry Kane is back for another onslaught of fast paced, razor sharp riffing with Age of the Idiot.  This time there are even more songs in almost the same amount of time, as Pettersson keeps things brief while cramming in more variety than ever before.

It’s clear that this album is going by the usual grind logic of cramming in a lot of fast paced songs that quickly transition from one idea to the next, as the nineteen songs on Age of the Idiotfly by in just over half an hour and only a handful run past the two minute mark.  One of the first things you’ll notice when turning this one on is that despite the brevity Henry Kane shakes up the formula far more often than you might initially be expecting.  Where faster death metal and grind of this type tends to hit with the same type riffs from one song to the next, you never know quite what you’re going to get here.  Sometimes the focus might be on the type of mid-tempo riffing where the HM-2 buzzsaw tonality drives things forward, while the shorter songs might come in closer to the spastic blasting of grindcore or some crust and hardcore leaning moments.  Pettersson even injects some death/doom into Age of the Idiot even as the song lengths seem to get shorter, slowing things down to let a darker and haunting atmosphere provide just a little bit of breathing room from the onslaught of the faster paced moments.  There’s just as much punk influence as there is death metal, and this is capped off by a gnarly cover of Asta Kask’s “Psykopaten” from their 1986 EP Med is i magen.  The guitar and drums sound monstrous throughout each of the songs, and the razor-sharp nature of the tonality combined with just how dense the drumming is making the material even more appealing.  Despite how many directions Henry Kane goes in, there are standout riffs that stick with the listener and there’s quite a bit more staying power to these songs than is typical for such a short, rapid-fire album.

Despite how loud the instrumentals are, Pettersson’s growls and screams come through clearly on the recording and benefit from just how much energy is being generated.  You may be familiar with his usual approach on any of the bands that I mentioned earlier in the review, but the approach for Henry Kane is a bit different as the screams tend to head towards the higher end of the spectrum and give off a punk and grind feel more often than death metal.  It’s an approach that works well, and the pitch changes almost as frequently as the instrumentals channel different genres which really helps Age of the Idiot feel diverse.  For almost the entire album Pettersson handles all this solo, but on the longest track “Entrenched in Nihilism” he brings in Soothsayer’s Líam Hughes to shake things up slightly.  I’ve been a fan of just how much range Pettersson has over the years, as he’s always been able to bring something a little different to each band and album.

Henry Kane channels just about every element of Swedish death metal and grind, offering straight up assaults alongside some surprisingly atmospheric and melodic moments.  Despite the short length of all the tracks, they head in differing directions while still providing plenty of substance and proving that Pettersson can branch out without losing any of his songwriting focus.  Whether you’re a fan of old-school Swedish death metal with that familiar HM-2 tone, grind, or punk, there’s plenty on this release to keep you coming back and it’s one of my favorite projects that this busy musician has in his roster right now.  Age of the Idiot is available from Transcending Obscurity Records.