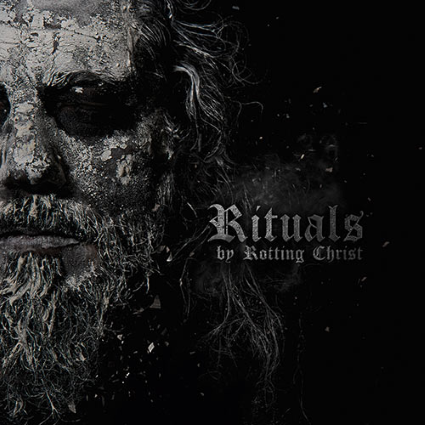 I was a late-comer to Rotting Christ.  Even so, I have spent the last couple years loving the variety of different styles and shifts they have accomplished over the years.  There is the melodic black metal opus that is A Dead Poem, the highly Septicflesh-colored, symphonic Sanctus Diavolus, and the folky/viking marches of Theogonia and Aealo.  While I was a little bored with their previous outing, the ability for these Greeks to innovate and change their sound always keeps me coming back.  With that in mind, I don't consider Rituals to be a big leap for the group, but rather an enjoyable Aealo Pt. 2.

This album shares many of the qualities I liked so much about that original release: the Middle Eastern-sounding folk additions, occasional female vocals, dominating walls of sound, and simple-yet-hooky war marching riffs.  Right off the bat, "In Nomine Dei Nostri" treats us to the quite literal sounds of marching and an infectious acapella chant.  Once more, it is time to strap on the helmet and ride to battle.  This is followed up by Rotting Christ's patented guitar style, which I always describe as pretty basic and easy for the average player, but with melody choices that are instantly recognizable and fun to listen to.

If a summary was ever needed to help illistrate how a band can take a repetetive riff that an 8 year old could play and spin it into platinum..."Ze Nigmar" would serve us well.  This track somehow became a fast favorite for me, but it relies on such a sophomoric hook.  Even so, the bending power chords and backing squeels worm their way into your very bones and force you to move to the rhythm.  I have seen other groups attempt this many times and fail, but Rotting Christ really are the masters of selling simplicity.  In addition to picking just the right melody, a lot of this success has to do with the vocals.  Everything from the tone, inflection, and cadence are implemented so perfectly as to pull you headfirst into the experience.  And I'll be honest and say that I just have a wierd thing for Sakis' accent.  It's just too perfect.

Now all fan-boying aside, Rituals is far from album of the year.  Much like my thoughts on last year's Black Dahlia Murder and Lamb of God albums, this is an enjoyable romp through familiar territory.  The songs are definitely worthy of many replays, driving with the volume up and the windows down...but ultimately I've heard it before.  In fact, a lot of these riffs feel like I have quite literally heard them before.  Someone even made the joke that the album should be called "Recycled."  I wouldn't go that far, but the fact remains that you're not going to find much in the way of innovation here.

But if you're like me and are a fan of the group, or just don't always care if the music you're listening to is "the next big thing," You will probably dig Rituals.  And not to sell the band too far short on their playing, there are a few solos to be found, as well as the ever-present pounding on the kit by Themis Tolis.  You can stream the whole album below and order packages through Season of Mist.