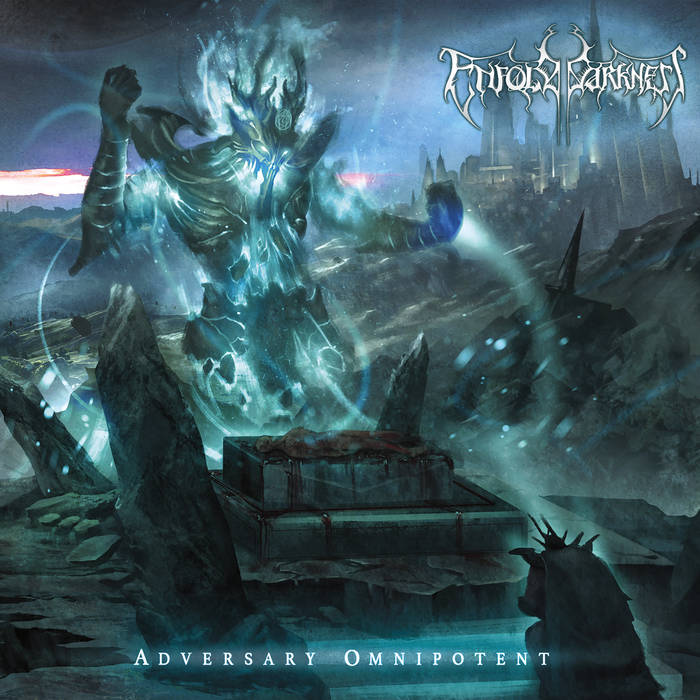 What I Like: Adversary Omnipotent opens on a very high note through the atmospheric, symphonic intro "Awaken, Brak'tal O'Minn" followed by the subsequent sensory beating that is "Lairs of the Ascended Masters" (my personal favorite from the album).  These first minutes let us know that we are in for an epic story filled with old gods and unholy rituals.  In terms of the music, I can't decide if I'm a bigger fan of the vocals or the guitars.  In terms of the former, this is  a very impactful performance.  The highly punctuated staccato delivery punches holes in my soul like a Nazgûl blade.  And with its deliberate cadence comes a variety of styles ranging from grim black metal snarls to deeper death growls; conjuring thoughts of The Black Dahlia Murder and Carach Angren alike.

As for the guitars, there is a lot to take in.  Progressive song structures are filled from front to back with highly technical hooks, raging solos, and blackened tremolo melodies.  It's a dense experience, and one that took me a few listens to really take in all that is going on. When combined with the machine-gun double bass kick and aforementioned ferocity of the vocals, things can get pretty righteous.  I may have thrown up the metal claw a few times.

Critiques: Many of these tracks, and the album as a whole, are just too long.  Given that the pacing and volume remain fairly consistent throughout the duration, it starts to wear me down after a while.  I really appreciated the occasional slower build or general change in aesthetic.  A few more of these would go a long way.

The Verdict: Solid blackened death full of impressive soloing and guitarwork, but within compositions that could use some further development.  These musicians know how to play their instruments very well; they could just stand to work on more varied songwriting and focusing attention on adding more signature moments to each song.  Stream early HERE.

Flight's Fav's: Lairs of the Ascended Masters, Liberator of Mages, Terror of a Perilous Quest