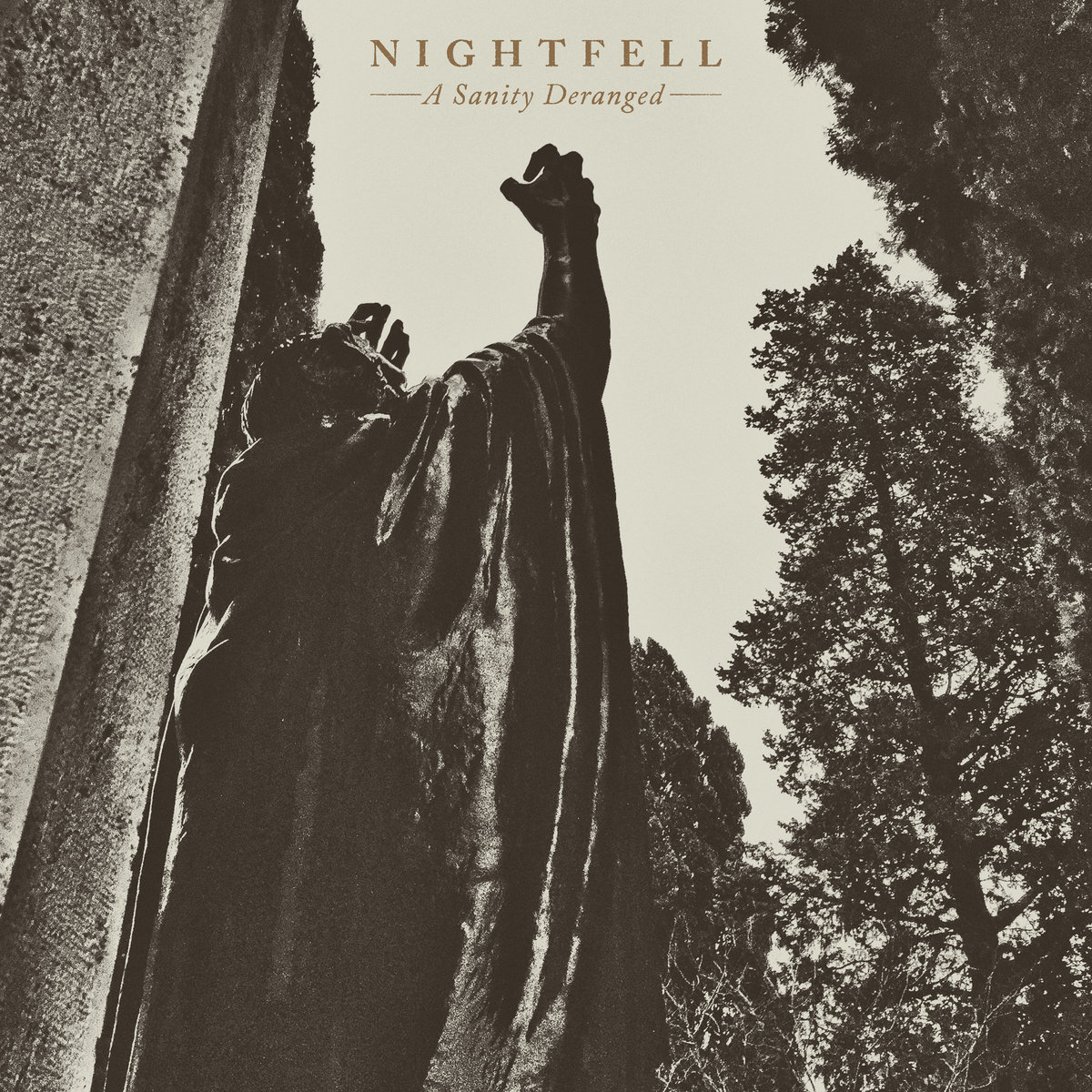 A Sanity Deranged
by Nightfell

Nightfell’s been creating some engaging dark, heavy music since their inception in 2012.  Initially coming through as an extension of Todd Burdette (Tragedy/Severed Head of State) and Tim Call’s (Aldebaran/Sempiternal Dusk) other groups, their sophomore effort Darkness Evermore in 2015 saw the project move towards its own space.  Four years later Nightfell has returned with album number three, A Sanity Deranged, which opens up the sound even further and lets the darker, haunting melodies spread outwards while still bludgeoning away at listeners in equal capacity.  It’s a natural progression for the group and has the immediate hooks to draw you in while providing plenty of nuances to discover over time, making this the band’s best work to date.

What makes A Sanity Deranged so appealing is how overwhelmingly heavy it feels, even when the instrumentals are at their mellowest.  There are plenty of passages where the tempo picks up and the riffs channel equal amounts of death/doom and crust, but when Nightfell slows things down and the melodies take over they have that same somber and bleak tonality of funeral doom.  The tone never wavers even as the writing transitions over to atmosphere instead of brute force, and the way that the band seamlessly moves between these two sides remains just as engaging during the tenth listen as during the first one.  Compared to the previous two albums it feels like there’s a bit more death metal and funeral doom influences than before, though the way that it’s pulled together hints at particular bands without ever falling too closely towards any specific one.  Nightfell’s kept this one at a lean thirty-five minutes which works to their advantage, as the haunting atmospherics and slower tempos spread out naturally on the longer songs without overstaying their welcome and there’s always a transition to hold your focus.

The vocals come through with as much power as the instrumentation, with the growls towering over the recording for almost the entire album.  Compared to some of the other bands that fall towards death/doom there’s quite a bit more variation to the performance, as the growls start off at a very low guttural pitch and work their way upwards towards some higher ranges at key moments.  Songs like “To The Flame” switch things even more with chants that fill the air alongside the growls and create a dense and murky atmosphere.  It may seem like a small touch overall, but it’s these types of nuances that help A Sanity Deranged to stick with you.

It’s been a long time in the making in comparison to the year to year release pace of Nightfell’s first two albums but the wait has been worth it.  The group has pushed their sound further outwards with some of their most majestic and haunting melodies to date alongside the crushing riffing you’d expect.  It’s also the second album from Tim Call this year that’s top tier, joining the Sempiternal Dusk record from last month.  A Sanity Deranged is available from 20 Buck Spin.