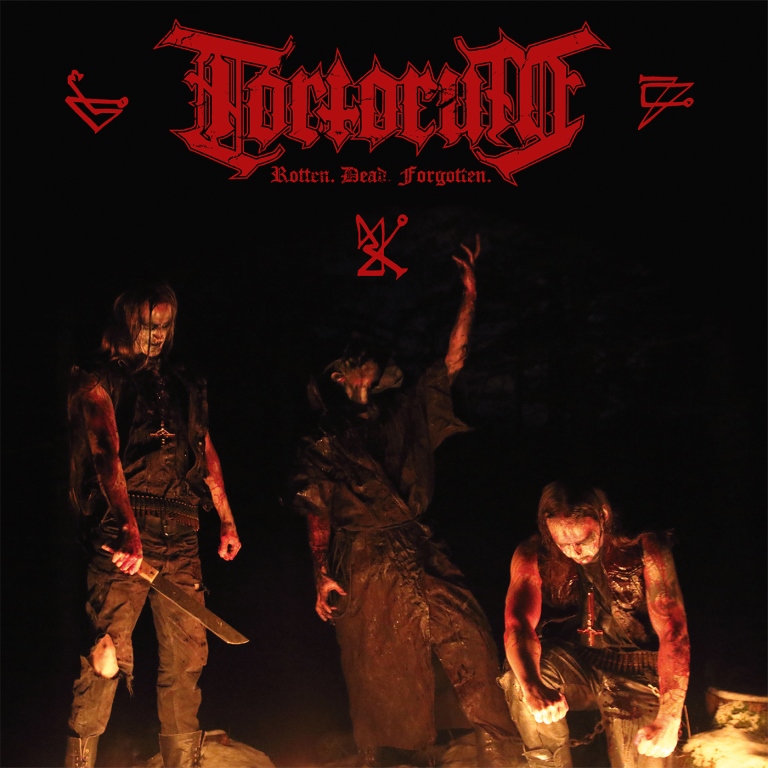 Norwegian black metal.  For fans of the genre, those three words should tell you all you need to know about the album you are about to hear.  But for those wishing for more, I will press on.  It has been two years since the Tortorum's last album, Katabasis, and during that time the trio has seen a slight change in lineup.  Unperturbed, they are pushing forward with their latest hymn to darkness,  Rotten. Dead. Forgotten.  I am not very familiar with the band's early material, but from what I can gather this album represents a shift musically.  It's far from a complete overhaul, but Tortorum seem to be experimenting with different ways to terrorize the listener.  What was once presented through tortorous speed has been replaced largely with torment via spellcasting.

"All Suns Black" is the perfect representation of this idea, and also just a killer black metal anthem.  The track pulled me towards this album instantly with its haunting, hypnotic qualities.  The guitar arrangments are simplistic, but something about the layering of ominous minor key picking with the punctuation of distorted chords tunnels deep into my brain.  Add to this Barghet's raw and unbridled howls and it feels more like the recitation of some ancient curse than a song.  "Night of the Witch" and "Lucifer Vitrex" follow in a similar vein.  It's a formula for sure, but one I find to be very effective.

As if to prove that they can still rip full speed, "Life is the Enemy" features plenty of blastbeats and shrill tremolos like a swarm of bats against the twilight sky.  "Black Mantra Mysteries" is a bit more uptempo as well, though still relying on a sense of repetition to warp the mind and spirit.  While these tracks serve the flow of the album just fine, I actually prefer the slower ones.  I think it has a lot to do with why dynamics are such an important thing.  When the entire song is a wall of berating distortion, the loudness starts to lose its effect as your ears become acclimated.  Alternatively, a song that is generally quieter with slower pacing lends itself better to opportunities to shock you with sudden blasts of aggression.

Rotten. Dead. Forgotten. lives up to its grim title with equally mirthless compositions that remain true to the genre's original intentions.  It's not an album that is going to blow your mindballs, but it is no less worthwhile for fans of 2nd wave.  Bleak, mysterious, ominous; if these are the adjectives you crave from your metal collection then Tortorum are here for you.  The album comes out this Friday through W.T.C. Productions.  I suggest you get out your blackest attire and combat boots before then.