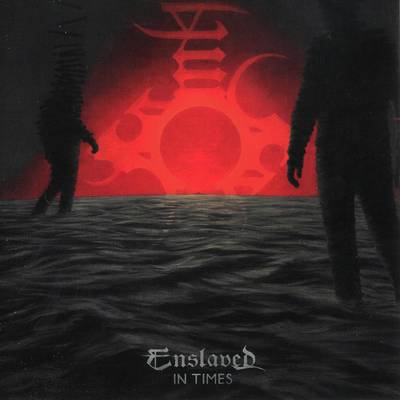 In Times
by Enslaved

It is truly amazing how much Herbrand‘s clean vocals have evolved and improved with each release. As much as I love their dark, depressive qualities on Isa, that was the voice of a boy. With RIITIIR and now In Times, these are the mature tenors of a man. Whether it is the result of some professional coaching or trial and error, the outcome is no less captivating. Comparisons to Åkerfeldt are warranted, but fail to capture the entire picture.

Hopefully you share my man-crush on Enslaved’s keyboardist, because this is probably the most clean singing you will hear on an Enslaved album to date. It’s to the point where I wonder if they might pull an Opeth (speaking of Åkerfeldt) in the near future. But this is not to say that the growls are any less harrowing. The opening of “Thurisaz Dreaming” and darker moments of “One Thousand Years of Rain” certainly give Grutle his due with performances not dissimilar from “Roots of the Mountain.”

Moving along to the other instruments, this may very well be the most diverse album stylistically well. While there is still plenty of the expected Enslaved brand proggy chord work and time changes, there are other times when song structures feel simplified. This is particularly apparent on “Building with Fire,” a song that is very near traditional rock. There are even a handful of rock solos on this album, my favorite of which occurs during the final heavenly moments. Also new to the fold are some of the slower, picked melodies that drop the distortion in favor of chorus and delay effects. I never thought I would find myself thinking about Deftones while listening to Enslaved, but the dreamy, space-rock vibes and guitar tone are straight out of songs like “Hole in the Earth,” “Sextape,” “Rosemary,” and “Entombed.”

With only 6 songs, I am trying hard to avoid a track-by-track review, but I must return to “One Thousand Years of Rain” for a moment. Much like “Roots of the Mountain” on RIITIIR, this is the crown jewel of In Times. It’s simply breathtaking. The catchy-as-hell core riff is simultaneously blistering and sorrowful. It makes me want to bang my head and shed blissful tears all at once. We also see the return of a folky, chanted interlude not unlike on Below the Lights’ “Havenless.”

All in all, this may very well be Enslaved’s chilliest album to date, but one that is still plenty enjoyable and well-written. My initial impression was to say that it had fewer memorable moments than RIITIIR but shows increased consistency. This may be true to a point, but with each subsequent listen, I find myself more and more attuned to the various hooks and melodies. Prior to the album’s release, I heard some nervous talk about the song lengths. Those concerned can rest easy. Nothing is more annoying to me than a 10 minute track that sounds like one or two riffs on loop. Enslaved provide more than enough different content and smooth transitions in each song to keep them moving. In fact, this album seemed to fly by in no time at all.