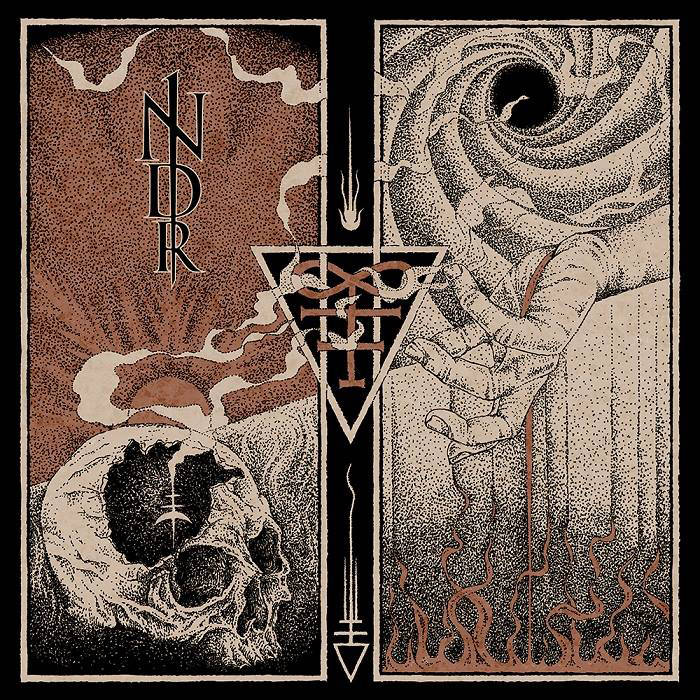 A Blaze of Modern Black Metal

Near Death Revelations
by Blaze of Perdition

Blaze of Perdition is a group I was not familiar with, but they have already released two albums to positive acclaim by both critics and fans. After hearing the two songs available on bandcamp, I was very happy to see this end up in my mailbox. Blaze of Perdition shares some strong similarities to Ascension, which to me is not a bad thing at all. In fact, I consider Consolamentum to be one of the most exemplary pieces of traditional modern black metal of the last few years. With Ascension's sophomore effect leaving me feeling unsatisfied, there was a void to be filled for this oppressive wall of sound. Near Death Revelations holds up astoundingly well in this respect.

Here, technical guitar playing takes a backseat to songwriting, but to great effect. The simple hooks are carefully woven into a dense sonic fabric. You may find yourself humming these ominous melodies long after the album has ended. The use of effects brings the old black metal formula into a modern production. And even though the majority of these riffs could be played with relative ease, Blaze of Perdition never shy away from a fiery solo to close out a track.

If there is a more methodical side to this album, it lies in the drumming. While not quite earth-shattering, it isn't Fenriz worship either. Blastbeats? Of course, but this is no one-trick pony. Rhythms serve as a focal point for the ebb and flow of each composition. Cascades of toms and double bass will seamlessly give way to thunderous mid-tempo affairs with crashes of lightning cymbals. Whether in the midst of the blazing intro to “Cold Morning Fears” or the slower closing to “Dreams Shall Flesh,” striking patterns will shift and contort arrangements into something far more challenging.

Between the vocals and mixing, similarities can also be drawn to another blackened 2015 release: Sulphur Aeon's Gateway to the Antisphere. The frontman's mixture of black grimness and death register along with the cadence share many qualities. Meanwhile, the impenetrable web of instrumentation occupies every square inch of the listening space. However, where I felt Gateway somewhat failed to utilize these aspects effectively, Near Death Revelations checks off everything on my wish list of improvements. Each instrument is allowed a full presence rather than becoming a fog of vague sounds. Riffs are better differentiated while the vocals spit double the fury. It took me several listens to get into Gateway and decipher all that was happening within, but with Blaze of Perdition; I was able to enjoy it from the very first spin.

In conclusion, while Near Death Revelations may not bring much new to the table, they have potential to corner the market on no holds barred modern black metal. Between the immersive production, able songwriting, and oppressive presence; Blaze of Perdition have found their way into my ever-growing collection of BM. It can be yours as well for the pricetag of $7.